END_OF_DOCUMENT_TOKEN_TO_BE_REPLACED

Tostitos Fiesta Bowl Hosts the Oklahoma State Cowboys on an AirField System, the Best Natural Grass Field in the Country, as Voted by the NFL Players 6 Years Running!!

The Oklahoma State Cowboys defeated the Oklahoma Sooners to clinch the Cowboy’s first ever Big 12 Championship title and BCS appearance. This historic day occurred while playing on the AirField System at T. Boone Pickens Stadium. The Cowboys are now headed to the University of Phoenix Stadium to play again on an AirField System in the 41st Annual Tostitos Fiesta Bowl January 2nd, 2012 live on ESPN at 6:30 MST.

AirField Systems is proud to say that both the T. Boone Pickens Stadium field and the University of Phoenix Stadium use the AirDrain Agronomic System and sub surface drainage. 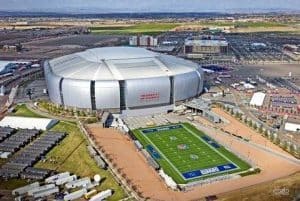 Home of the Arizona Cardinals – Tostitos Fiesta Bowl, #1 Field in the NFL since 2006

Oklahoma City, Oklahoma (PRWEB) December 19, 2011 — On January 2nd, 2012 the Oklahoma State Cowboys will play their first BCS bowl game in school history in the Tostitos Fiesta Bowl at the University of Phoenix Stadium in Glendale, Arizona. The playing field at Phoenix Stadium is home to the number one ranked natural grass football field in the country 6 years running according to the National Football League Players Association.

Tim Peterson, field manager for the Arizona Cardinals, attributes much of the field’s success to AirField’s subsurface drainage system. The AirField System is manufactured with 100% recycled synthetic materials which can help owner’s qualify for LEED certification. When Tim Peterson was given the task of determining the best system for the Arizona Cardinals, he began an intense 6 month study of the top 20 drainage systems in the country. At the conclusion the AirField System was the clear choice. One of the reasons the Arizona Cardinals chose AirField was AirField’s ability to create a nearly perfect perched water table by capturing and holding water longer than the other drainage systems, resulting in a better fieldturf. A research project by the University of Texas A&M, in partnership with the United States Golf Association, concluded the AirField System holds up to 3 more days of plant available water compared to the USGA gravel drainage method.

Tim Peterson of the Arizona Cardinals remarked “They learned what we already knew.”

Not only does the AirField System hold up to 3 more days of plant available water, it also has the ability to route storm water to an on or off site detention facility. There the storm water can be held for later use on the field turf and/or on surrounding landscaping. Thinking green and using a sustainable design, installation and construction of the AirField System can help create an environmentally friendly, self-sustaining site. Keeping in mind any project with a sand based profile can benefit from using the AirField System.

The American Institute of Architects and the United States Green Building Council have both approved the Airfield System continuing education course entitled “Synthetic Drainage for Sustainable Design in Modern Sports Field Construction”. The continuing education course discusses all aspects of the AirField System including the Texas A&M Research Project in partnership with the USGA. It also defines the basic components of the system, explains it’s sustainable attributes and reviews case studies revealing what makes the AirField System the number one choice for architects and engineers all across America.