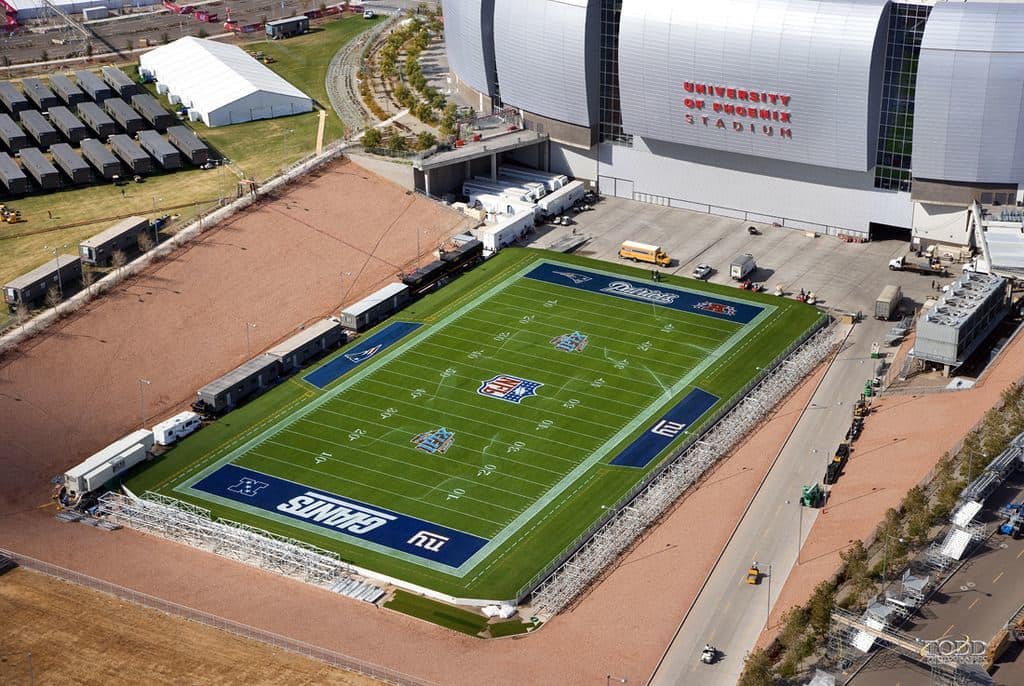 AirField Systems named #1 choice of NFL players! In an NFLP Players Association poll, the field at University of Phoenix Stadium was voted as the league’s top playing surface three years in a row. In 2008 it was also selected as the league’s best playing surface in a Sports Illustrated poll among NFL players, and was host to Super Bowl XLII and home of the Tostitos Fiesta Bowl.

Great article in this month’s SportsTurf:

Seventy-two percent of players prefer playing on natural grass and 15 percent favor infill systems; 11% had no preference and the others didn’t respond. Nearly 62% thought playing on synthetic turf would negatively affect their health after their careers are over. Nearly 93% said playing on artificial turf would shorten their careers; 91% said artificial surfaces cause more soreness and fatigue. And 85% said infill systems were more likely to contribute to injury.

Ninety-two percent of the players said they could tell the difference between softer and firmer infill surfaces but they were not as unanimous when it came to whether they preferred softer or firmer; 57% want softer, 17% firmer, and 27% had no answer.

Three in four players “strongly value” the work of ground crews, 21% “somewhat value” that work and less than 1% “do not value” grounds crew efforts. Forty-five percent of respondents attribute the condition of their fields to grounds crews; 28% credit ownership; 15% stadium management; and 5% give all these parties credit for field conditions.

When asked if the top-rated crews should be in charge of turf management for Super Bowls, 87% agreed and 7% said no.

This survey was conducted at NFLPA team meetings September through November 2008. A total of 1565 active NFL players from all 32 teams voluntarily participated.

Here are some random comments NFL players made about the league’s turf:

“Coordinate with shoe makers to see what surface/shoe combinations are the safest.”

“Create a universal guideline for both natural grass and artificial turf fields. Everything else is regulated and this should be as well. Some of these fields are injuries waiting to happen. Having different types of cuts of grass introduces a lot of guesswork for equipment staff and players.”

“Grass is probably preferred by most players, me included. However, our game field is the worst I’ve ever played on. Green sand does not do the job for me like it does for television. I believe our field is extremely dangerous, especially later in the season. Something should be done!”

“I feel that a grass field that is very well maintained is the best field to play on. The best grass field I have ever been on is at Texas A&M University. Artificial infill fields always start out great . . . but after 2 years of soccer games and concerts, the field is a mess. The maintenance of the field is not good enough and I place the responsibility on the owner.”

“Those franchises that cannot grow grass in November and December should re-sod more frequently or switch to synthetics. Overall the quality of the fields has improved dramatically however!”

“No more games in London!”

“If a cow cannot eat it, we should not be playing on it.”